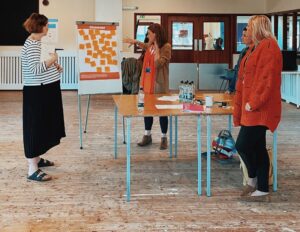 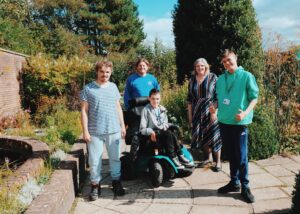 Derwen is working with branding specialists Design by COUNTRY. Together we are creating a brighter, more engaging online and on-campus presence. The aim of the rebrand is to be fully accessible and to have a brand which reflects our forward-thinking approach.

The rebrand will be used across the College’s main site, as well as satellite sites for day students at Telford, Walford (near Shrewsbury), and Ludlow.

The College and rebrand experts Design by Country are in the process of consulting with students, staff, clients, families and stakeholders to get a real feel for what Derwen is all about. We have already enjoyed two lively workshops – one with staff and governors, and one with the College’s Student Union Board. These have already offered up plenty of interesting and diverse ideas.

Accessibility is key to the new branding. The college will be working with COUNTRY, and The National Autistic Society to ensure that all new branding, signage, and website design are accessible to all current and potential stakeholders. 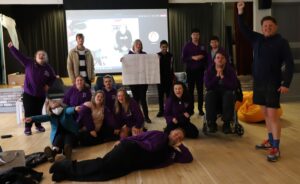 “As a leading further education college, it is vital that our branding reflects that we are a forward-thinking college. But also that we are caring, collaborative and passionate about doing the very best for our students.

“Accessibility is also of utmost importance, across College sites and online, for students, potential students, families, staff and visitors to our commercial areas.

“It’s a challenge, but we believe that through our partnership with Design by Country, we can deliver.”

“At COUNTRY, we are passionate about specialist education and in particular designing truly accessible brands and digital experiences. Our strategic creative process is inclusive by design, involving students, staff, stakeholders and customers to make sure we capture the essence of the brand. It’s an honour and a privilege to have been chosen by Derwen to deliver their rebrand, wayfinding and new website.” 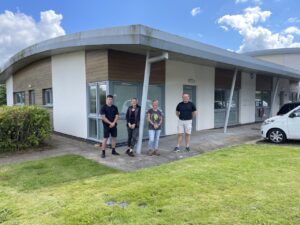 Derwen is excited to announce that we’re opening a new site, at Ludlow’s Eco Business Park, for day students, to teach work and independent living skills, to provide them with a tool-kit for future employment.

The new Derwen: Ludlow site – which launches at the end of October – will be replacing the current south Shropshire facility in Craven Arms. The new building offers a more spacious and accessible environment for Business students. The Eco Business Park’s excellent transport links will mean easier access for more students from across south Shropshire and neighbouring counties.

Students, aged 16 to 25 with learning difficulties, disabilities or autism, will follow a Business Support & Enterprise pathway, which includes teaching, qualifications and work placements. The pathway will equip them for employment in business, enterprise or retail after college.

“We have been looking for a while to strengthen our south Shropshire provision, in terms of accessibility of the building, student catchment area and meeting a need for SEND provision in the south of the county.

“The satellite is based on the Eco Business Park, just outside of Ludlow, and is ideal for day students from south Shropshire and other nearby counties, including Herefordshire and Worcestershire and Powys. We are all very excited about the move and the opportunities that this will bring for our current and future learners.” 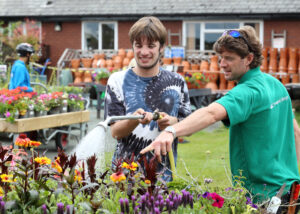 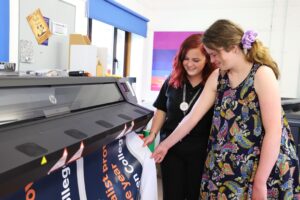 Derwen is urging more Shropshire businesses to support us to transform our students’ future employment prospects by offering just an hour or two for a weekly work placement.

Student work placements are a vital part of most of our students’ learning. As students progress from working in our on-site commercial areas, they go on to weekly work placements in the community when they are ready. So, College has been reaching out to Shropshire businesses. We are asking them for just a couple of hours a week to help change the future of a young person with special educational needs and/or disabilities (SEND).

It is important that work placements are relevant to students’ learning pathways and future ambitions. Therefore, the college is keen to work with charity shops, designers and printers, theatres, garden nurseries, cafes, restaurants and housekeeping businesses in Shropshire, preferably in or near Oswestry or Telford.

The work experience team are also looking for some specific placements local to Shrewsbury, for students at the college’s Walford-based site. They are particularly keen to hear from Shrewsbury-based florists, gyms, leisure centres and horticulture enterprises.

Just a few hours a week in a work environment provides vital experience for students. This helps them towards employment and a more independent future. Students are supported at all times during their placements by a Derwen College job coach and can be a real asset to a business.

Can you help support life-changing opportunities?

‘Only 6% of young people with learning difficulties go into work, which is an incredibly disappointing statistic. Derwen College’s mission is to create opportunities for young people who may have special educational needs, but have proved they are able and willing to work. This enables them to enjoy job satisfaction and also to live more independent lives.

“Our external work placement programme offers life changing opportunities for our students to undertake meaningful, real work experience which is relevant to their learning and future career hopes.

“Businesses that we work with also find it a rewarding thing to do. Offering work placements to a person with a learning difficulty promotes diversity and boosts a company’s reputation for being community-minded and inclusive.”

To find out more about how you could help change a young person’s future prospects, please contact Abi Baker on abi.baker@derwen.ac.uk

As part of a new Digital Skills unit at College, Digital Skills teacher Dave Robinson has launched a series of ’10 Questions With …’ video interviews.

We are thrilled to announce that the first one is with actress Caroline Goodall. Caroline has starred in The Princess Diaries, Hook and Schindler’s List.  Her film with Derwen College is now also shot, edited and ready to view.

Students were asked to submit their questions to this fascinating actress, who has 30 years’ worth of remarkable stories to tell.
Caroline was a joy to interview. She also sent each student involved in the project a signed photograph from Hook, in which she played Peter’s wife.
Thank you to Caroline for being so generous with your time and gifts. And, thanks to all the students for their brilliant questions.
We can’t wait to see her new film, The Islander, which will hopefully be out soon.

What is Digital Skills?

Digital Skills at Derwen College covers: using devices and handling information, being safe and responsible online, transacting, communicating. There is a focus on creating and editing.

Digital Skills is involved with all our learning pathways, and gives students the ability to transform some of their unique and exciting ideas into audio, video and photographic projects for everyone to enjoy.

Derwen College welcomed VIPs and media, including BBC Midlands Today and Radio Shropshire to join us in honouring two of our top, most inspirational teachers. Stephen Evans and Jessie Vaughan won much-coveted Bronze and Silver Awards in the Pearson National Teaching Awards.

Selected from thousands of nominations, Derwen College Sports & Leisure Co-ordinator Steve Evans was honoured as one of 102 Pearson National Teaching Silver Award winning teachers across the country. Teacher Steve Evans won the Silver Award in The Award for Excellence in Special Needs Education.

Derwen College Performing Art and Learning for Life teacher Jessie Vaughan has been recognised with a Bronze Award in the Digital Innovator of the Year category.

Steve was commended for his determination to bring out the best in every student. By partnering with community and national sports organisations, Steve has enabled a wide and inclusive range of opportunities for students. His passion and drive has been instrumental in bringing the Duke of Edinburgh’s Awards to Derwen College, giving students the opportunity, motivation and self-belief to get involved with these challenging awards, encouraging them to strive and attain goals beyond their expectations.

Steve Evans has now been shortlisted to win one of just 15 Gold Awards later in the year, in a programme which will be broadcast on the BBC.

Jessie was honoured in the Digital Innovator of the Year category for her commitment to embracing technology to engage with students at home and at college.  She used online meetings, social media and videos during lockdown, thinking creatively to make sure each and every student felt a part of college even if they were based miles away.

Derwen College held a virtual awards event to reveal the exciting news that they had a Bronze and Silver winner on their staff. We were lucky enough to be joined by VIPs including Lord-Lieutenant Anna Turner JP, Shropshire High Sheriff Tony Morris-Eyton and Oswestry Deputy Mayor Cllr Jay Moore.

“We are proud and delighted that teachers Steve and Jessie’s amazing work has been recognised in this way.  Despite the incredible outcomes that their students achieve they remain modest and firmly grounded. For both, students are always centre stage, and going ‘over and above’ is just the norm. At Derwen College, we believe that young people with SEND deserve the best possible life chances and are proud to have staff who do everything in their power to achieve this. Both Jessie and Steve really are an inspiration to students and the colleagues working alongside them.”

We are incredibly proud that a former student has been awarded a British Empire Medal from the Queen.  As an extra bonus, he also earned himself a slot on ITV’s This Morning programme presented by hosts Phillip Schofield and Holly Willoughby.

James Beardwell, who has autism, was named in the Queen’s Birthday Honours List for his hard work keeping customers safe at his local Sainbury’s supermarket during the pandemic.

He works at Sainsbury’s in Chelmsford, and was a student at Derwen main site, in Gobowen, near Oswestry. James followed a Retail pathway at the college.

His job at Sainsbury’s involves sanitising trolleys at his local store. He was nominated by colleagues for keeping shoppers safe and making them smile.

The award led to a spot on ITV’s This Morning show. James was invited to speak to television presenters Phillip Schofield and Holly Willoughby. They presented the dedicated football fan with a goodie bag filled with England-football-themed gifts.

Janet said: “James followed a Retail pathway. I remember him as pleasant, well-mannered and polite, and always well presented. He was hard working and punctual, a real asset to any employer.

“He enjoyed a work experience placement at Iceland in Oswestry, represented college at water polo and football and was an ardent football supporter.”

Simon Roberts, CEO at Sainsbury’s, said that the supermarket was delighted to congratulate James.

“On behalf of everyone at Sainsbury’s, I would like to say a huge congratulations for being awarded the British Empire Medal (BEM) in the Queen’s Birthday Honours 2021.

“James, who is autistic and experiences anxiety, initially found it difficult to adjust to the pandemic. However, he was committed to playing his part in feeding the nation and continued to go above and beyond for our customers.”

“I remember James very well and everyone here at Derwen College is incredibly proud of his achievements. We work hard to support students to reach their aspirations towards employment and maximum independence and love to hear many success stories from former students. However, I think this is the first time that one of our students has been honoured by the Queen!”

Students congratulated Sports & Leisure Coordinator @SteveE_Derwen who won Gold at the @TeachingAwards on Sunday. Thanks to Steve for the passion, commitment and dedication to offering every student the opportunity to live a healthier, happier lifestyle. @DofECentral

Thanks to @shropshirelive for the lovely story about our award-winning Sports & Leisure legend Steve. ... See MoreSee Less