The sun shone, the crowds came and smiles all round at Derwen College’s annual fete which took place on Thursday 31st May.

A new location within the commercial areas of the college proved popular with fete visitors who enjoyed some of the old favourite games and stalls as well as new additions such as the Upcycled Furniture stand from Coleg Derwen @Ashdale House, steam engine ride and Afternoon Teas.

The fete attracts former students who love returning each year to catch up with old friends as well as huge local community support and parents of current students. Alongside the traditional games, refreshments and stalls the Summer Show is also a big hit with visitors. The theme of this year’s show  was ‘Come Fly With Us’ and was performed and created by Creative Studies students, there were two packed out performances which attracted rave reviews.

“We have had a bumper event this year, the atmosphere is just fantastic and it’s great to see so many people enjoying themselves at the fete. We would like to thank all our supporters who are generous with their time, their fundraising and their enthusiasm for the work of the college and also to external stall holders and all our sponsors – we continue to be inspired by the generosity we see” said Meryl Green, Vice CEO and Principal Derwen College.

The fundraising target for 2018 at the college is £60,000 towards the development of the Therapy and Fitness Centre. The college hosts events throughout the year including Afternoon Teas’, music events and themed activities.

The winning tickets for the Grand Raffle are listed as follows:

Staff at Derwen College were presented with certificates after achieving specialist diplomas in teaching students with learning difficulties. 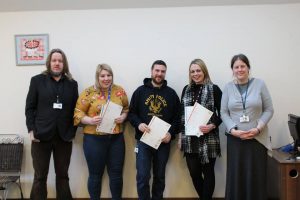 The qualification was completed over one academic year and was tutored by specialist teachers Helen Pocknell and Iain Evans.
The qualification requires teachers to undertake research into learning difficulties and disabilities, and examines the history of special needs legislation, policies and practices.

Iain said: “The course allows teaching staff to focus on specific disabilities such as autism, dyspraxia or dyscalculia. We are very proud of the achievements made by Jade, Tim, Sam and Sioned. It has been valuable to witness their ongoing development and to see how the knowledge and strategies they have gained goes on to be used in their teaching and support.

“We are lucky at Derwen to have valuable resources that we can utilise, including input from our speech and language therapists and occupational therapists.”

For further details about the course and how to book, contact our HR department on 01691 661234 Ext 247 or email learnwith@derwen.ac.uk

Female footballers at Derwen College are looking forward to their first game of 2018 with a new team name which honours the training and support they have received from Chester Football Club. 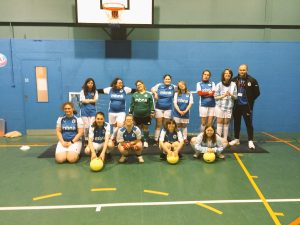 Chester FC Community Trust continues its commitment to encouraging football at grassroots level working alongside young adults at the college for students with learning difficulties and disabilities.

The club has provided the newly named Derwen Devas, from Derwen College with weekly training for its growing female football team, as well as free kit and opportunities to attend Chester FC games and experience behind the scenes tours.

The young women, some of whom had never played football before working with the Chester FC Community Trust, are aged between 16-25, and thoroughly enjoying the fun, fitness and football. They play their first competitive game of the season against Wrexham on 17th January. They are also planning on watching the professionals in action when Chester FC play Hartlepool at home on 23rd January.

Chester FC Community Trust chief executive Jim Green says that the charity was very pleased to be able to work with and build on the women’s team that was established at Derwen College.
He said: “Derwen College first came to our attention through our coach Ben Richards, who formerly worked for Shrewsbury Town. He was keen to build a link with Derwen College. He explained to us the college’s ethos and we shared his enthusiasm to work with Derwen’s Ladies football team.

“The feedback from the college has been really positive and we are starting to build a strong team. It’s a great college to work with, and the enthusiasm from staff and students has been outstanding.”

Chester FC Community Trust delivers sport, education, health and inclusion programmes for all ages with football, and in particular the development of the women’s and girls’ game, is a key focus.

“Female football is one of our big pushes at the moment. Along with Cheshire FA and Shropshire FA, we are seeing a huge rise in the number of players and hope to double the number of women football players by 2020. The FA are committing a fantastic level of resources, and a huge rise in interest driven by the success of women’s football nationally and at top flight level, and by large increase in broadcasting women’s football. 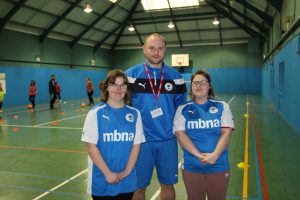 Ruby Bruce, a Hospitality and Catering Studies student who loves to play in goal, is thoroughly enjoying the camaraderie in the team. She said: “It’s exciting and fun playing with my friends. We’re all like sisters together!” Ruby is a Manchester United fan who enjoys watching the game but has only recently taken part herself. She attends training every Wednesday afternoon with Ben Richards and Derwen Sport and Leisure Instructor Jack Harris.

Retail Studies student Sarah Blows prefers to play up front as a striker and is enjoying being part of the Derwen College team. She said: “I love watching and playing football and rugby and I’ve learnt a lot.”

Chester FC Community Coach Ben Richards said that he felt privileged to be working with the women and to coach them towards their first game of the season. He said: “I live near Derwen College so it’s great for me to work with and support a college that I know so much about and is right on my doorstep. “It has been wonderful to see how the players have blossomed. Some were very nervous and unsure to begin with because they didn’t know what to expect. Now there’s no stopping them.”

At Derwen College we were privileged to host regular customer Betty Williams as part of her 90th birthday celebrations which coincided with Derwen’s 90th anniversary year.

Staunch Derwen College supporter Betty was born in 1927 – the same year that Dame Agnes Hunt founded Derwen – so it was a great honour to welcome her back to the college’s Orangery Restaurant to mark her ninth decade.

Since then, we have received the sad news that Betty has passed away. Betty will be sadly missed by staff and students at Derwen College who grew to know her over the years. Our thoughts are with her family.

Derwen College, has been shortlisted in two categories of the prestigious TES Further Education Awards 2018, regarded as the ‘Oscars’ of the further education calendar. 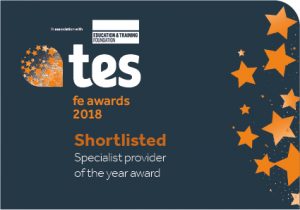 Derwen College has been nominated for both the ‘Specialist Provider of the Year’ and ‘Employer Engagement’ award in the annual celebration of excellence across the further education sector. The overall winners will be announced on 23rd February at a glittering ceremony at London’s Grosvenor House Hotel. The college last made the shortlist in 2015 when it was nominated for FE College of the Year.

The TES FE Awards 2018, held in association with the Education and Training Foundation, are now in their seventh year, and received a record number of entries for 2018. The ‘Specialist Provider of the Year’ gong is a new category for 2018 which aims to recognise the sector’s diversity and excellence. The ‘Employer Engagement’ award focuses on strategic and innovative approaches in delivering employers’ workforce development needs. 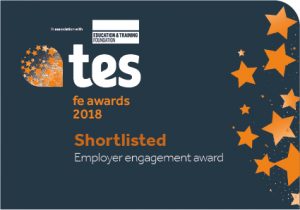 Meryl Green, Vice CEO and Principal of Derwen College, said that she was thrilled that the college had received two nominations. She said: “We are absolutely delighted with these nominations which are a reflection of the hard work and commitment of the entire team here at the college. To be shortlisted from such a large pool of excellent further education colleges is an honour, and we look forward to finding out if we will be named overall winners in February.”

Tes FE editor Stephen Exley said: “We were absolutely thrilled that the number of entries this year exceed our previous record by a quarter, which reflects the growing stature of the awards.
“Our expert panel of judges was extremely impressed with the calibre of entries and I look forward to celebrating the excellence that exists across the FE sector.

Apprenticeships and skills minister Anne Milton, who will be attending the awards, said: “I’m delighted to see a record number of entries for the TES FE Awards – especially at such an important time for our FE sector. Congratulations to those excellent institutions on the shortlist, as well all those doing their bit to provide high-quality education and training right across the country.”

Please click the image below to read our Autumn 2017 newsletter 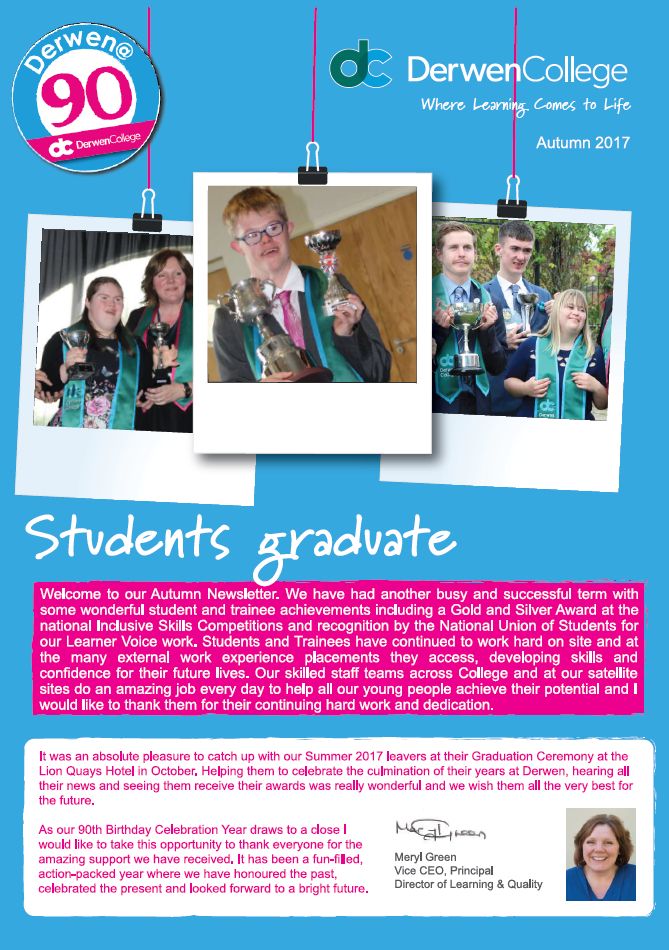