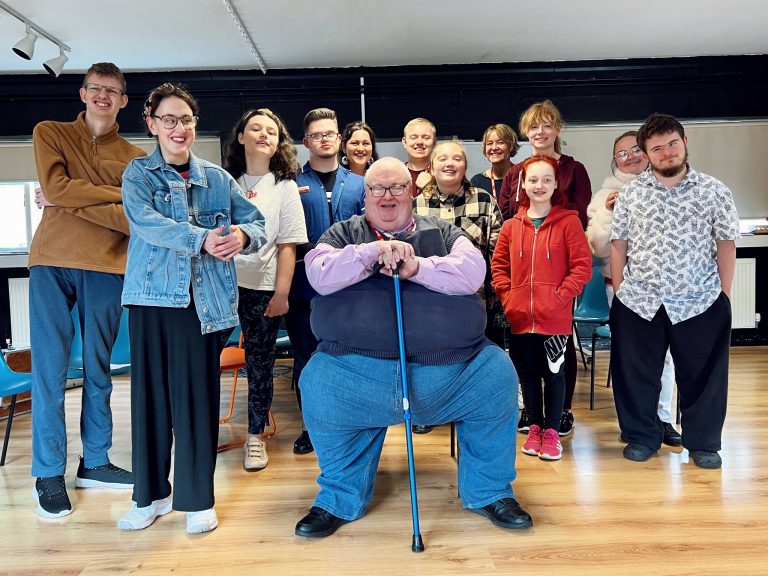 Performing Arts students were thrilled to meet Doctor Who actor Simon Fisher-Becker who will be filming a new drama series on location at Derwen College.

Simon, who has also appeared as the Fat Friar in Harry Potter and the Philosopher’s Stone, visited along with actors and production crew involved in Oswestry-based Rocking Horse Media’s latest project.

Rocking Horse Media will be filming their upcoming care home drama series at our Gobowen campus. As part of this partnership, they will be providing exciting and unique work experience opportunities for our Performing Arts students to learn all about working on a television series, as it is being shot.

They have already held one workshop where students got to meet and work with the cast of Henry House, which saw students getting to act in front of lead actress Órla Jones and learn from Simon Fisher-Becker.

This week, Rocking Horse will be holding another workshop where Derwen College students from our Telford satellite site will help their in-house graphic designer produce the official logo for the series.

Rocking Horse Media CEO Gareth Owain David Thomas said he was proud to announce the beginning of a long-term partnership with us.

He said: “We have been in touch with the award-winning college for months, ever since we shot feature film, “Izzy vs Jess’ there. We all realised the exciting opportunities of working together.

“We will also be doing all we can, making our professional services available to help promote the fantastic work that they do.

“There is no understating the importance of working with Derwen College, and what it means for Henry House, Rocking Horse’s flagship project. Thanks to Derwen College, we are able to transform that belief into a reality and it will be an honour to provide some of their own students with opportunities to be a part of it along the way.”