Derwen College students, who hail from all over the UK, embraced St David’s Day on 1st March, using the Welsh patron saint as inspiration across the college’s pathway areas. 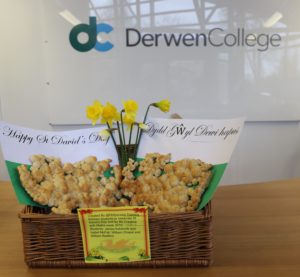 Sporty fundraisers representing Derwen College, near Oswestry, have spent hours training and raising sponsorship in readiness for the challenging Shrewsbury Half Marathon on Sunday 17th June.

The three-strong Team Derwen are running in aid of the specialist college for young adults with learning difficulties, disabilities and autism, and have already raised several hundred pounds between them.

Watch out for the pink vests of runners joining the event for Derwen College, running 13.1 miles to raise money for new therapy and fitness facilities to benefit students including a hydrotherapy pool.

Katie Griffith, a school cook from Morda, will be striding out for Derwen, supported by her young family. Katie, from Sweeney Drive, is a cook at Morda Primary School. The 29-year-old mum-of-two will be running her fourth half marathon for the college, though it will be her first in Shrewsbury.

She said: “I enjoy running in my spare time, and I feel better for actually running for a charity rather than just running it for nothing. As soon as I saw a post on Facebook asking if anyone would like to fundraise for the Derwen College, I grabbed the opportunity. I’m looking forward to doing the Shrewsbury one as I haven’t done any there yet. I’m hoping to do it in just under the two hours but will be happy with any time!”

Other runners for Team Derwen include Georgi Cleveley whose sister Charlotte attends Derwen College, along with college Learning Support Assistant Peter Williams. Between them they have already raised more than £200.

Students from Derwen College will be supporting runners and handing out water and medals at the end of the Shrewsbury Half Marathon.

There's nothing like a sea shanty and spinning session to finish off a Wednesday afternoon on a high. #wellnesswednesday #Wednesdayworkout #shantytiktok #EarWorm #DerwenSeaShanty

Our ground-breaking on-site training hotel is four years old today! Thanks to Premier Inn and @_NovusSolutions who believed in the power of providing opportunities for young people with SEND through learning work and independence skills. Read here how student Oliver found employment with Premier Inn after finishing at Derwen College www.derwen.ac.uk/next-steps/student-outcomes/oliver-independence-after-derwen/ ... See MoreSee Less