There’s something for ornithologists of all ages to do over the school half-term holiday week. Because, at Derwen College Garden Centre Shop, we’re celebrating Nest Box Week from Monday 17th February to Sunday, 23rd February 2020.

We’re calling on young ‘twitchers’ to enter into the spirit of National Nest Box Week with a bird-spotting competition of our own.  So, there will be five metal robins hidden around the shop for you to find. Every person who manages to identify all five will receive a sweet treat. Then all entries will be entered into a prize draw to win a special mini Nest Box Week hamper.
The shop is also offering 10% off the college’s upcycled birdboxes. These birdboxes were created by students as part of their work experience. There’s also a ‘buy one get one free’ offer on bags of bird food. So shoppers can to keep bird feeders and bird tables stocked through until spring. 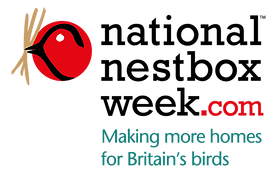 Over the winter months, Derwen College staff and students have been filling bird feeders outside the Garden Centre. Because of our effort we have spotted many regular visitors. These include two robins, Great Tits, jackdaws and a little Jenny wren.
Garden Centre Shop commercial supervisor Sharon Jones says the team have enjoyed getting to know their winged visitors.
“We have lots to do over the half term week for bird lovers. We’d love shoppers to come and join in the competition, support birds in their own gardens, and spot some of the regular birds who visit the Derwen bird feeders. We even have a huge buzzard who regularly flies over the football field. We think he’s after the moles.”
Derwen College commercial areas provide work placements for students with special educational needs and disabilities. The site offers a Garden Centre and Shop, Garden Café with outdoor play area, Orangery Restaurant and a popular Woodland Walk.
National Nest Box Week is an annual event that takes place every year from the 14th to 21st February. It has been running for over 20 years and is now an important part of the ornithological calendar. St Valentine’s Day was chosen for the start of National Nest Box Week as it’s the traditional date when birds pair up for the new breeding season.

Running novice Georgi Cleveley is taking on the challenging Shrewsbury Half Marathon on Sunday 17th June, to raise money for a charity that is close to her heart

Georgi, from Shrewsbury, will be tacking the 13.1-mile course in aid of the specialist college where her big sister Charlotte is now in her final year, having learnt independence and work skills and made many new friends.

Georgi is running for Derwen College, in Gobowen, near Oswestry. She is running in aid of the specialist college for young adults with learning difficulties and disabilities raising money for new therapy and fitness facilities to benefit students including a hydrotherapy pool. Georgi has so far raised more than £200.

Georgi, who works at Specsavers in Shrewsbury, saw the request for Derwen runners on the Facebook page.

She said: “I follow the college’s social media to keep an eye out for pictures of my sister Charlotte. I had already signed up to the half marathon earlier in the year but thought it would be nice to run for a cause.”

The 22-year-old hasn’t done much running before but used to play sports at school including football and hockey.

She said: “!t’s my first proper race. I’ve been doing my best to fit in as much training as possible with the aim to finish it one piece.”

She continues: “Charlotte has been at Derwen since leaving school and has really benefitted from her time there. Our family were really nervous about Charlotte leaving Severndale School, in Shrewsbury, as she had been there for 17 years and moving on to Derwen College seemed a huge step, especially as she would be living at Derwen in term time.

“Derwen College has been a fantastic opportunity for Charlotte and her time there has ensured that she has been able to learn many new skills, make lots of new friends and become more independent. When Charlotte leaves college in July, she will be moving into supported accommodation in Shrewsbury.”

She will be joined on the day by Morda Primary School cook Katie Griffith who is also running in aid of Derwen.

Derwen College is a specialist college for young adults, offering learning, independence and life skills for residential and day students. Students from Derwen College will be supporting runners and handing out water and medals at the end of the run.

To support Georgi visit her fundraising page at https://uk.virginmoneygiving.com/fundraiser-display/showROFundraiserPage?pageId=929135

Things are ramping up nicely in Martials Arts @DerwenCollege