Students and staff were thrilled, and a little bit star struck, to receive a visit from actor Sam Retford, who left behind the cobbles of Coronation Street to visit us this week. 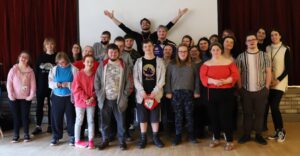 Sam shared his stories and acting tips with budding performers at Derwen.

Sam is best known for playing troubled Curtis, who left Coronation Street in a dramatic exit over Christmas. He has also worked on popular television shows including Hollyoaks, Casualty, Ackley Bridge and Death in Paradise.

Moreover, the talented 22-year-old has worked in theatre, film and more recently turned his hand to directing and production as co-founder of Collective Media Company.

Actor Sam was a charming speaker, who engaged students with an animated question and answer session, where he shared anecdotes and tips. There was much laughter in response to some hilarious stories, and lots of inspirational advice. 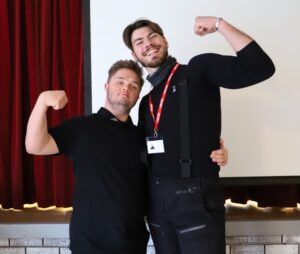 He confessed to a disaster on his first day on the Hollyoaks set.

“On the very first day of filming, I was meant to throw a basketball at another boy. However, I’m not very good at sport! I missed the boy completely and the ball bounced across the set smashing some very expensive lighting.”

Despite a disastrous start, Sam made a good impression, and many more acting roles followed.

He is a strong advocate for more inclusivity and diversity in the acting industry, and encouraged students to work hard to find their place in the competitive performance world.

His brother Max has cerebral palsy and autism, and is his biggest fan. Because of this, Sam can use Makaton sign language which he uses to help communicate with Max.

Sam has also earned plaudits playing opposite actor and presenter George Webster in short film entitled ‘SAM’. The film stars Sam and George – who has been in the news as the first children’s presenter with Down’s Syndrome on CBeebies. The film sees two teenage boys with very different lives, become friends and fall in love.

He encouraged the College’s Performing Arts students to forge their own career path, and be heard in the world of film, television and theatre.

“It’s a fantastic time to get into the industry. There are so many more opportunities, and some great companies and initiatives who are becoming a lot more inclusive. There are agents who specialise in working with actors with learning difficulties. We are also changing the way we work on set, to be more inclusive.

“All actors have needs and requirements which we need to be aware of to make everyone’s lives easier. Personally, I’m a slow reader, and find it difficult if lines are changed at the last minute.

“We need to tell people in the entertainment industry what would make our working day better. People aren’t mind readers and won’t know what we need unless we tell them. We all need to embrace our inner drama queen, and be more diva! It’s down to us to educate the industry, and change it for the better. Your voices can make all the difference.”

“It was a pleasure for students and staff to meet such an experienced actor, and to learn so much from him. Sam was an inspirational guest who truly engaged our students. Anna, one of our wonderful Performing Arts students, put me in contact with Sam and worked alongside me to arrange the talk. His charm, character and stories kept us all engaged, inspired and laughing for the entire afternoon! I was also very impressed with his Makaton signing. We can’t thank Sam enough for giving our aspiring performers a true insight of the industry, and we hope to work with him again in the future.”

“I enjoyed the experience so much. I was so happy and excited, and I enjoyed having to get him from reception with Jessie.

“His talk inspired me to never give up on your dreams. Don’t be nervous, be excited when performing with other actors. And I learnt all the differences about working in TV acting and stage acting. Sam was lovely and really funny, and so inspiring.”

Here are a selection of Derwen College students’ questions and Sam’s answers:

Did you always want to be an actor? 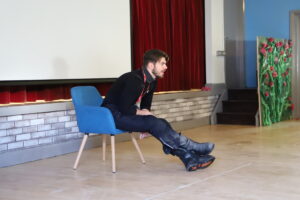 “I always loved to watch and mimic people and pretending to be different characters. I used to enjoy sitting in cafes pretending to be on the phone, making out that I was an astronaut or a spy. Or following people, mimicking their body language and walk. I can’t really do that anymore, now that I’m on telly!”

“I didn’t initially see that acting could be a career, it was just something I loved doing. Originally, I liked fish and decided I would study to be a marine biologist. Then, I was appearing in a play when I was approached by a scout who suggested I audition for Hollyoaks. I was thrilled to get my first television job!”

Do you prefer stage or screen?

“I love both for different reasons. On television, if you go wrong, then you can start again, but on stage, it’s all live. Sometimes things go wrong, you forget your lines, someone forgets their cue, and you have to improvise.  I love it. You just have to remember that the audience have never seen the play before, so don’t know if you go off script!”

“On television you get a second take. However, if you have a bad day on television, it can be recorded forever. I did a scene on Coronation Street which I was assured was a ‘rehearsal’. Then the director shouted ‘cut’, and they used the take. It was awful!”

Do you prefer drama or soaps?

Drama is very different to soaps. In a drama, you might only cover eight pages of script in a day, running through the same scenes many times, with different camera angles, focus and lighting.

On a soap, there are cameras everywhere filming all at once, and sometimes just one take to get it right. You could potentially cover 45 pages of script in a day.

I enjoy both for different reasons.

Do you feel nervous performing on stage and television?

“I always feels nervous before performing. Nerves are important. When you don’t feel nervous, that’s when you should stop working. Nerves fuel your performance. Nerves and excitement are very similar emotions. You have remind yourself of that, embrace the ‘excitement’ and enjoy the moment.

What advice would you give to a actors with learning difficulties.

“It’s a fantastic time to get into the industry. There are so many more opportunities, and some great companies and initiatives who are becoming a lot more inclusive. We are changing the way we work on set. There are now agents who specialise in actors with learning difficulties.

“All actors have needs and requirements which help to make their lives easier. Personally, I’m a slow reader, and find it difficult if lines are changed at the last minute.

“We need to tell people what would make our day work better. We all need to embrace our inner drama queen, and be more diva!”

“It’s down to us all to educate the industry, and change it for the better. Your voices can make all the difference.

Do you have any tips for performers who struggle with love scenes, for example AJ and Josh who played Beauty and the Beast in the Christmas Show.

“As an actor, your job is to tell the story truthfully. You have to forget you are Josh and AJ. You are Beauty and Beast, and have to show what the characters feel.

“I always prep for a character part. For me, it’s important to understand the character’s background. I put together a playlist of music that my character might listen to, I think about what food they’d like. You have to completely immerse yourself in a character.”

Did you enjoy being in Death in Paradise?

“Filming on Death in Paradise was brilliant. I was meant to be there for two weeks, but due to Covid, I ended up in the Caribbean for a month. There can’t be many jobs where you get to enjoy four weeks of sunshine and sea. The only down side was having to act wearing a suit in 40 degree heat. The director asked me to act as if it wasn’t that hot. However, my brain couldn’t stop my body from sweating profusely.”

What have you got coming up next?

“One of my recent projects is a sci-fi  LGBTQ+ musical film called White Wedding. I’ve been working with Eyre-Morgan and Ely, who co-directed SAM, and am enjoying being part of the production and directing team as well as acting. It’s an exciting project. Watch this space!”