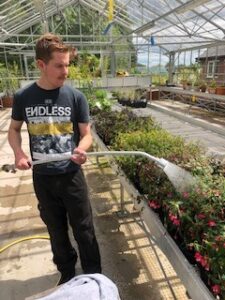 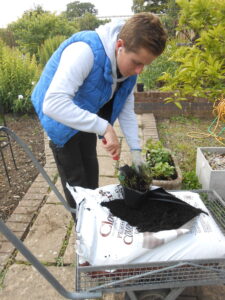 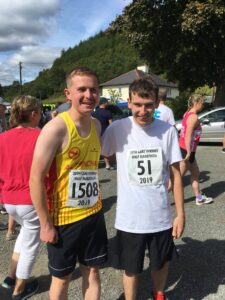 Former Derwen College Horticulture student George Raffle has moved out of home and has been working as a National Trust volunteer, thanks to the work and independence skills he learnt while at Derwen College.

George was a Horticulture student at Derwen College from 2014 to 2019, attending as a student for three years. This was followed up by two years on the college’s Living and Work Programme (now known as Springboard) learning further work and independence skills.

During his time at Derwen College, George learnt the independence skills needed to move into supported living, and engaged in work placements at Derwen College’s Garden Centre, as well as at Bryngwyn Hall, Llanfyllin, and Whittington Castle grounds. Whilst at Derwen, George achieved his Level 1 City and Guilds in Horticulture.

The 24 year old from Altrincham, in Greater Manchester, has autism and a moderate learning difficulty, yet was determined to work hard to achieve as much independence as possible. He was particularly pleased to secure a role as long-term development volunteer at National Trust property Dunham Massey, in Cheshire, after leaving college.

“I always try to be a positive person, and I am enthusiastic about all that I do.  People often say I have a good sense of humour. I have a good knowledge of plants and I am good at plant identification. I enjoy creating plant displays. I am a trustworthy person and I am often given extra responsibility such as the role of supervisor for the group.

“In my work experience at Bryngwyn Hall, I helped to maintain the gardens by weeding, removing brambles and ivy, as well as planting bulbs and putting in tree rings.  I believe this work experience taught me the skills needed to work at Dunham Massey.”

“My interests include sport, I like to keep fit and healthy, I enjoy football and running, and I like to challenge myself regularly to ParkRun. I was captain of the football team, and a member of Oswestry Special Olympics swimming team. Exercise is important to me both physically and mentally.”

“When he first arrived, George studied catering – it seemed the natural choice as he was interested in food. However, George soon made a request to transfer to horticulture – a decision which was supported by college and local authority, and turned out to change his future career choices forever.

“George said he would be happier gardening. It was entirely his decision, and something he wanted to do. Science was always one of his stronger academic subjects and he really enjoyed learning about plants, pests, diseases as well as the health and safety aspects of horticulture. At school, he struggled with maths and English but enjoyed science experiments.”

“He was very happy in Horticulture, he enjoyed the camaraderie and felt less pressure and anxiety than in a hospitality environment. He also loved working at Bryngwyn, and enjoyed meeting people and chatting.

“In terms of George’s love of sport, Derwen College was brilliant for him. He loves sport – running, cycling, swimming, and football. Sports co-ordinator Steve Evans was inspirational, and supported George in running in Oswestry ParkRun events. In 2019, he even took part in the Lake Vyrnwy Half Marathon.”

George completed his Gold Duke of Edinburgh’s Award whilst at Derwen College, enjoying an expedition to Scotland.

“There were lots of positives from his time at Derwen. He learnt to cook, clean and do his washing, skills which he now uses in his supported living,” says mum, Jennifer.

Lockdown has been hard for George. He has missed seeing his family as much as he’d like to, and has not been able to work at National Trust since March 2020. There were also long breaks from the local disability football team and athletics club that he enjoys attending.

Mum says: “He gets on well with his housemate Steven who is also sports mad which really helps. The pair enjoy watching Sky Sports and take turns to cook and look after their home. George is a Manchester City fan, while Steven support Manchester United, but they have learnt to put this difference to one side!”

George is hoping to return to his role at National Trust soon. He has maintained regular contact with the head gardener there and George has been visiting for walks, keeping in touch.

During lockdown, George has bought a lawn mower and jet washer, and has been keeping up work skills in neighbours’ gardens. He even tends his parents’ garden.

“George has started his own enterprise with his personal assistant Laura. She helps make the appointments and accompanies him to his jobs, and he does all the gardening work.

“He’s even been able to tend our garden as part of his work, which has been a lovely way to see him a bit more regularly during this difficult time!”