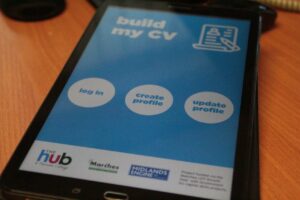 Derwen College won a prestigious Natspec Award – awards which recognise excellence in specialist further education. The award was for ‘Innovative Use of Technology’ for a suite of apps that the college has developed to promote employability skills for students with SEND.

In October 2020, the college also received the Innovative Award for Technology from NASEN.

The project was funded via the Marches LEP Growth Deal with Government for capital skills projects, and focused on developing a suite of apps to help young people with learning difficulties and disabilities to gain skills in work placements and supported employment.

The apps include a Premier Inn app which takes students step-by-step through servicing a hotel room. Students use the app on tablet or mobile phone at the college’s on-site training hotel, at Premier Inn work placements and ultimately during paid employment at Premier Inn.

Other apps include a CV Builder app which enables people with SEND to create their own CV with minimal outside support. The ‘Support Work’ project also supports employers in their recruitment of staff with SEND.

Derwen College Principal, Meryl Green, was delighted to hear that the College had won, during a virtual awards ceremony.

She said: “I’m incredibly proud that Derwen College has won the ‘Innovative use of Technology Award’ in the Natspec Awards 2020. Competition in this category is extremely tough and this accolade clearly demonstrates that Derwen College remains at the forefront of creativity and innovation within SEND education.”

Natspec Chair of the Judging Panel Nigel Evans praised the high standard of the award submissions which demonstrated the innovation, expertise and creativity within the specialist further education sector.

He highlighted the strong partnerships that Derwen College developed with Oswestry-based Hunter Bevan Marketing & Design, Starfish Labs app developers, as well as with Premier Inn, and Makaton. These relationships were vital in ensuring the apps were of industry standard.

He said: “This project showed a strong use of partnerships within the hospitality industry, a technology firm and funding from the local enterprise partnership resulting in products that are easy to use, professional in appearance and will be easy to transfer to other employment settings. The incorporation of Makaton increased the accessibility of the apps and broadened the range of students able to use it.”

Neil Bevan, Director of Starfish Labs and Hunter Bevan said, “The Starfish Labs and Hunter Bevan teams are so proud to have been a part of this project, working in partnership with Derwen College. It’s been a great collaborative effort including research and development to identify student and employer needs, and how the students interact with different learning methods in the apps.

“The apps are unique in the way they combine video, photos, Makaton symbols, text and sound, and in the ability for the college staff to tailor content to specific course pathways. I’m delighted that the suite of apps has been recognised with such a prestigious award from an organisation as highly respected as Natspec. Well done to all involved, and we’re looking forward to developing the apps further with Derwen College, to take them into other colleges and employers, both in the UK and in exporting British educational tech expertise in overseas markets.”

This year, save money on postage, and send family and friends a Derwen College Christmas E-card!

Share online or email your e-card direct to loved ones.

This year, save money on postage, and send family and friends a Derwen College Christmas E-card!

Share online or email your e-card direct to loved ones.