Home > Stars of the show at Premier event 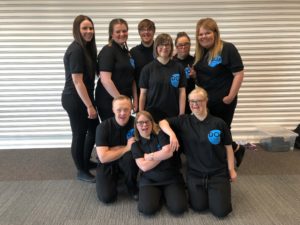 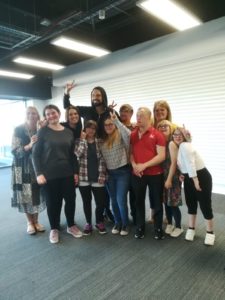 Performers from a Derwen College received three standing ovations from more than 5000 people when they performed on the same stage as singers Pixie Lott and Craig David, and met television personality Rylan Clark-Neal.

Derwen College sign, song and dance group Derwen on Tour (DOT) performed in front of their largest ever audience at a nationwide Premier Inn Celebration in Hampshire this week (19th September).

Students from the specialist Shropshire further education college took to the stage with an audience of 5,000 people at the hotel’s star-studded annual celebration at Farnborough International Exhibition and Conference Centre.

The group was made up of a mixture of experienced and newer DOT members. Three Derwen College graduates returned as guests to join in the momentous occasion, whilst student Ben Moore-Hill only joined DOT this term.

Former students Thomas Shacklady, Amy Roach and Sara Tustin stayed at Derwen College’s Short Breaks provision to attend rehearsals with DOT. The three were greeted back onto campus like celebrities.

Sara said: “It’s weird to be back but when I had the email asking me, I immediately said; ‘Yes, yes, yes!’”

Offering advice to newer members of the group, Sara said: “You have to be committed and have determination, and just enjoy yourself!”

DOT opened the party with choreographed sign and dance routines to Wham! classic ‘Wake Me Up Before You Go, Go’ and ‘This Is Me’ from The Greatest Showman.

Second year student Ben – who joined DOT just this month and has had only three rehearsals – has previous street dance experience and wanted a new challenge.

“It’s a good thing to learn to do new things. I was bit confused to start with but am learning the moves. Everyone has been very positive and helped me.”

“We felt honoured to be asked to perform by Premier Inn at such a high-profile event. It was an emotional and amazing experience. 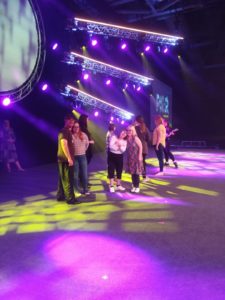 We have staged shows at many fabulous events including Llangollen International Eisteddfod and Christmas lights switch-ons, but this was by far our largest audience to date.

“We were delighted that Sara, Amy and Thomas returned to make guest appearances, and thrilled to welcome newest DOT member Ben whose first ever performance will be in front of 5,000 people!”

It's #BlueMonday - a day referred to as the saddest day of the year. At Derwen, we take mental health and wellbeing of students and staff seriously every day. We are proud to be @AoC_info awards finalist in the Mental Health & Wellbeing category. @AoC_Sport @DofECentral @AshDofe

Today is #BlueMonday - a day that is often referred to as the most depressing day of the year. At Derwen, we take the mental health and wellbeing of students and staff seriously every day of the year. We are very proud to be a Association Of Colleges awards finalist in the Mental Health & Wellbeing category 2021/22. An inclusive sports & leisure programme, Duke of Edinburgh's Awards and a dedicated therapies and counselling team, ensure that everyone gets the health and wellbeing support that they need, when they need it. AoC Sport @aoc_sport @dofeuk ... See MoreSee Less