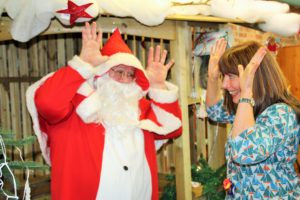 Derwen College is urging everyone to make Christmas more magical for children with communication difficulties by learning festive Makaton sign language at a workshop at Oswestry Library on Thursday, 21st November.

A trained tutor from our officially ‘Makaton friendly’ college will be running the two-hour Signing for Santa workshop at the library from 2.30-4.30pm.

Senior Makaton Tutor and Derwen College Head of Speech and Language Therapy Julie Hawkins will be leading the workshop which will teach Christmassy signs, symbols and songs to enable festive helpers to communicate with youngsters with learning difficulties and disabilities. The course costs just £10.

The idea for Makaton’s Santa Signing Workshop originally came about through a partnership between The Makaton Charity and Weardale Railway, in Co Durham.

Julie Hawkins explained: “A few years ago, The Makaton Charity developed Makaton signs and symbols to support Santa on the Weardale Polar Express. A mum filmed Santa signing to three-year-old Betsy – a little girl with Down’s Syndrome – which made her Christmas magical. The video went viral, with more than 50,000 views. From there two Makaton tutors developed a Makaton Workshop to teach Santas to sign. We were really pleased to run our first workshop in 2017.”

“We believe that by learning a few simple signs, every Father and Mother Christmas and would-be elf could communicate effectively with all children ensuring that the grotto experience is truly special for children with learning difficulties and disabilities. The workshops are great fun and offer a bit of extra help for grotto staff, making sure that Father Christmas is never lost for words.”

Fundraiser Anna and daughter Gweni walked up #OswestryHillfort yesterday as part of the #DerwenLEJOG Challenge. Teams of up to six are walking the length of Britain over August to raise funds for #DerwenCharity. Read the full story at https://bit.ly/39Mf6m5. #SupportDerwen

Fundraiser Anna Evans and daughter Gweni walked up Oswestry Hillfort today as part of the Derwen LEJOG Charity Challenge. Teams of up to six are walking the length of Britain over August to raise funds for Derwen College Charity. Read the full story at bit.ly/39Mf6m5. Support them with sponsorship at bit.ly/FundDerwenLEJOG ... See MoreSee Less