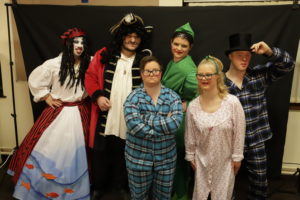 Talented students brought the house down when they performed Peter Pan as the end of term Derwen College Christmas Show.

Derwen College provided yet another successful Christmas Show this year, entertaining guests, students, families and staff with their production of Peter Pan.
Among the guests were supporters of the college, local dignitaries, parents and students from neighbouring schools and nurseries.
The Performing Arts team have yet again written and produced the show which is always a popular event and a highlight in the College’s calendar as well an amazing opportunity to showcase the talent of all the students involved. 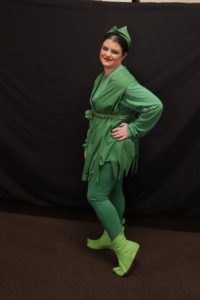 “We were delighted to have a packed audience for the show which is always keenly anticipated by those attending. The students put so much hard work in to this, not only those starring in the production but those who worked on the props and costume. A fantastic achievement for the students and a real ‘hit’ to end the term with,” said Jen Fawcett-Jones, Curriculum Manager at Derwen College.”

Well done to everyone involved in this fabulous show – the perfect way to celebrate the end of term. Happy Christmas. 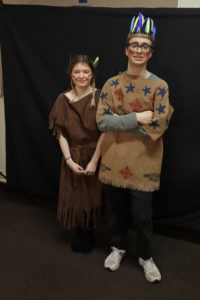 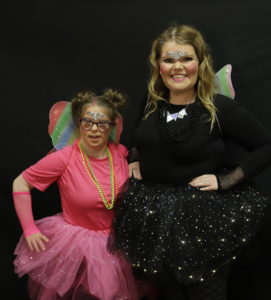 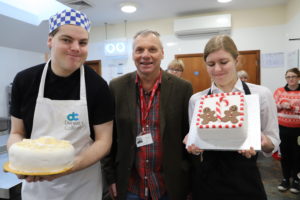 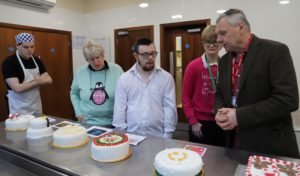 Teams of catering students competed in a competition which saw them bake and decorate Christmas cakes from weighing out ingredients to the magical finishing touches. The winners were picked by guest judge Mark Fisher owner of Sebastian’s Restaurant, in Oswestry. 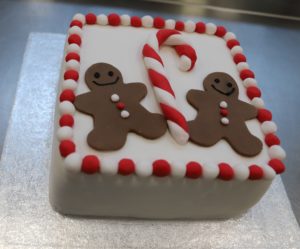 Due to the high standard of entries, Mark found judging the cakes exceptionally hard, eventually awarding joint first place to the ‘Northern Stars’ and ‘Team Seals’.

The Northern Stars impressed with a classic white and cold star themed creation, whilst Team Seals opted for a jolly gingerbread man theme.

Mr Fisher, who has been a chef for 46 years, said that the standard of entries was very high.

He said: “It was very difficult to judge. The attention to detail on all the cakes was excellent. Students have obviously spent a lot of time creating intricate decorations, all of which were completely different and original.”

Students started making the cakes back in October, and were tasked with baking the cakes, feeding them brandy, and covering them in marzipan before icing and decorating.

Christmas cakes handmade by students are available to buy in the Garden Centre shop along with Christmas gifts, cards, plants and decorations.

For more information regarding Derwen College’s shopping and eating facilities go to www.visitderwen.co.uk 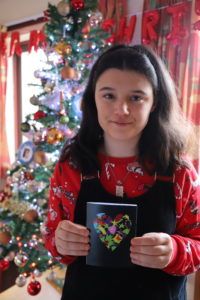 A creative student has won a competition to see her Christmas design adorn the official greetings card of the nationwide Association of Colleges (AoC).
Amy Jude is a 21-year-old residential student at specialist Derwen College, in Shropshire. She won a Christmas card design competition organised by the Association of Colleges. As the winner, her vibrant design features on the AoC’s official Christmas greetings card for 2019 – both card and electronic GIF versions.
Amy, from Hereford, was awarded with a voucher for her hard work. She said she was happy and surprised to have won the competition with her heart-shaped creation which features iconic Christmas images such as stars, stockings, holly and a Christmas pudding.
She said: “I was really shocked when I was told I’d won. I phoned my Mum straightaway and she was shocked too. I like art and design, and enjoy using bright colours and strong shapes. For this design, I drew a Christmas pudding, stocking, holly, parcels, baubles and stars. I used marker pens to make the colours stand out.”

Association of Colleges Chief Executive David Hughes picked the winner of the competition.
He said: “We are delighted to be using Amy’s fantastic design on our Christmas cards. It’s great to have talented students designing cards for us and this year the standard of entries was extremely high as always. Amy’s stood out through her use of such vibrant colours and the spirit of giving and a time to celebrate was clear. We’re very proud to be circulating it far and wide this festive season and I am sure everyone will love it!”
The former pupil at Barrs Court Special School, in Hereford, is in her first year at specialist college Derwen College – a further educational college for young adults with special educational needs and disabilities (SEND). She is following the college’s Creative Arts pathway. 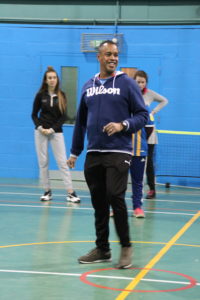 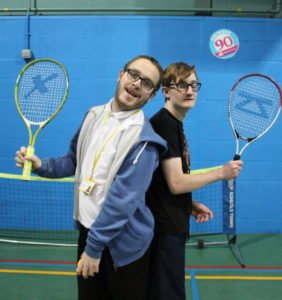 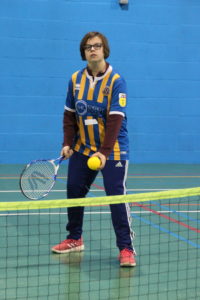 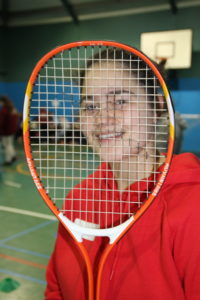 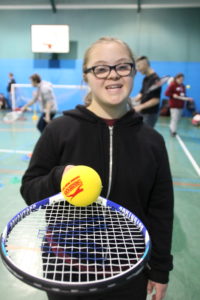 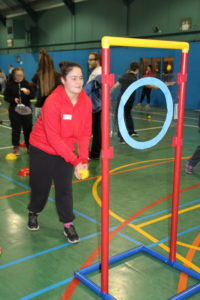 A smashing time was had by all at the inaugural Derwen College Tennis Festival.

The specialist college for young adults with special educational needs and disabilities (SEND) welcomed more than 20 students from Severndale Specialist Academy in Shrewsbury and Coleg Cambria, in Wrexham to the Derwen College Disability Tennis Festival.

The aim of Derwen College Tennis Festival was to make tennis accessible to all using tennis skills in fun games and challenges, engaging all students of all abilities.

Sports co-ordinator Steve Evans praised everyone who took part and helped make the college’s first festival such a success.

He said: “We ran a range of tennis-related activities, turning traditional tennis on its head to find ways to engage all the students. Everyone enjoyed taking part in activities and having a go, playing together supported by professional tennis coaches. It was lovely to see everyone of all abilities pick up a racket and play. We are proud to have organised such a fun event promoting fitness, social skills, self-confidence, team-building and fun through tennis.

“Derwen College is all about inclusivity and our sports and leisure activities are no exception.”

This was the college’s first tennis festival and is part of Derwen’s commitment to tennis as part of the college’s packed sports and leisure programme.

The college recently won Disability Programme of the Year at the 2019 County LTA Tennis Awards. The college for young adults with special educational needs and disabilities (SEND) now qualifies for the regional Lawn Tennis Association (LTA) awards which will be announced in March 2020. 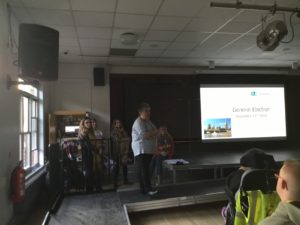 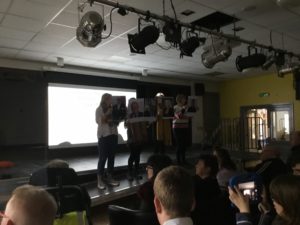 Derwen College students are being supported to have their say about the running of the country in the upcoming general election.

Learner Voice and Personal, Social and Health Education (PSHE) teams worked with students during a Derwen College General Election Workshop. The impartial workshop helped learners to gain a better understanding of each party and their election promises; supporting them to make an informed decision on who they would like to vote for on 12th December.

North Shropshire candidates supplied statements which were read out aloud to students. The students were also familiarised with each candidate’s name and party logo.

The workshop answered questions including where to vote, what help students would be allowed on the day, how to mark a ballot paper and whether or not to tell people how you have voted.

Learner Voice co-ordinator Sarah Laszlo said: “It was essential that each candidate was given a fair hearing and that we remain entirely impartial. We knew it was unrealistic to organise for all five candidates to visit at the same time. We therefore asked them to provide written statements that we could deliver.

“I was really impressed with how engaged students were by what is an undeniably complex topic. There was some passionate debate about many issues that directly concern students. Many of them are keen to have their vote on 12th December.

“As a college, we have only just had our Student Union Board elections – where candidates make a speech and students hold a secret ballot as to who they believe would best represent them – so the democratic process is fresh in their minds.”

Many learners at the College will be voting in a general election for the first time.

However, students are familiar with the democratic process through the College’s robust programme of Learner Voice.

Derwen students are active members of the National Union of Students (NUS) and are involved in Natspec’s Student Parliament.

Derwen College has been part of the National Union of Students since 2008 and was the first specialist college to join. Students vigorously lobby for the rights of all young people with learning difficulties and disabilities.

Derwen College Walford students celebrated the Queen's Jubilee with an afternoon tea fit for royalty. Find out about learning, work and fun at Derwen Walford, near Shrewsbury, by signing up to our Open Evening on 6 June at https://bit.ly/WalfordSummerOpenEvening @LocalOfferShrop @ShropsPACC