Llanfyllin Spar owner Mark Prust has agreed to share his experience and knowledge in retail to become an ‘Industry Champion’ for Derwen College, near Oswestry.

The owner of the second-generation business, which was established in 1975, was delighted to volunteer as an Industry Champion, supporting retail staff and students.

Two retail students from Derwen College, in Gobowen, travel to Spar every Tuesday morning for external work placements. In his new role, Mark will also be keeping the college up-to-date on the latest technologies, training and best practice.

Mark said he was very pleased to support the college in any way he was able.

“I was surprised but pleased to be asked to contribute my retail experience to enhance the work done at Derwen College. I hope to be as pro-active as possible in helping out with discovering and understanding latest innovations,” he said.

“At Spar we are continuously looking at the latest technology and training for till systems, stock-taking and health and safety which is information that we can share with college staff and students.

“We enjoy having students working here along with learning support assistant Julie Bryan. We have not had to adapt the way we work around them, they have fitted in seamlessly and are a pleasure to work with.”

Mark said he was also looking forward to visiting the college’s main Gobowen site and to coming to see the students at the annual sponsored walk, fete and Summer Show.”

Retail students Thomas Alexander and Sian Walker work at the Spar every Tuesday taking on roles such as stacking shelves, checking stock and customer service. They both enjoy their time working at Spar with Sian particularly relishing conversing with staff and customers in her native Welsh language.

Retail Studies Pathway Lead Sioned Davies said it was wonderful to have Mark on board as an industry champion.

She said: “The role of the industry champion involves being a point of contact for the Retail department. Mark can advise us on till systems and record of stock, as well as offering training support to our staff and students. The purpose of the role is to keep Derwen College – as a training provider – current. This will ensure we are training our students in the skills they require to work in a retail environment after college.”

Students and staff from the satellite site in Baschurch, near Shrewsbury, visited Aico’s Centre of Excellence to learn more about facilities within Aico – the market leader in fire and carbon monoxide detection.

Liam commented: “It was important for us to work with Aico to link the day with employability skills, as this is an essential part of the students learning at Derwen College. The students experienced a fantastic opportunity to look at various career paths and transferable skills in the workplace”.

As part of the day, Pat Jones, Sales Advisor and Louise Reid, Marketing Executive took the students around the different departments within Aico to show the different types of roles available within business environments.

Students took part in an interactive session in Aico’s Ember Place, a mock bungalow created to highlight fire and carbon monoxide risks within a home. They were shown best practice for siting of alarms in relation to these risks. The smoke chamber was also used to demonstrate how alarms react to smoke, heat and carbon monoxide, to give a real life feel to the sessions and to aid with the students learning.

Ruth Braddick, teacher at Derwen @Walford commented: “The trip to Aico was absolutely amazing, a fantastic experience for the students which gave them confidence gaining knowledge of fire awareness in the workplace and their own homes. They also gained valuable knowledge of varied employability opportunities”. “All of the Aico staff were very accommodating and friendly towards our students. We would like to say a big thank you to Aico for providing this experience and we very much look forward to working with the team again in the future.”

Derwen College is to award a trophy to an intrepid student each year in memory of a much-loved adventurous young woman.

The Gobowen specialist college, has been given the award – which will be presented every year to a student who has challenged themselves through the Duke of Edinburgh’s Award scheme ­– by The Kirstin Royle Trust.

The Kirstin Royle Trust was set up in 1993 in memory of Kirstin who died aged 22. The trust began with the aim of providing opportunities for young people to participate in challenging activities that give them a real sense of adventure. Kirstin was a kind and compassionate teacher who loved the outdoors, so it seemed natural that the trust provided opportunities for young people to participate in activities that would otherwise be very difficult for them.

After 25 years, the charitable trust is wrapping up its activities, and wanted to leave a lasting legacy with the college in the form of an award in her name.

“We specifically chose to donate the award to Derwen College due to their involvement with the trust in the past. Derwen College students participated in residential weekends at the Raymond Priestley Centre in the Lake District where they were encouraged to challenge themselves and embrace new opportunities,” explained trustee Arran Holdsworth.

“We hope the award will be handed out for endeavour and personal achievement for a student who has stepped out of their comfort zone and achieved something they did not think would be possible for them,” he added.

Sports and Duke of Edinburgh’s Awards co-ordinator Steve Evans said that Derwen College felt privileged to be asked to award a trophy in Kirstin’s name.

“Derwen have been linking with the Kirstin Royle Trust for the last few years as the trust has been part funding the Duke of Edinburgh’s Awards residential placement at Lake Coniston each summer,” he said.

“We felt very honoured to be able to accept this award from the Kirstin Royle Trust, and look forward to presenting it to one of our Duke of Edinburgh’s Awards students for exceptional commitment and hard work.”

The trust has also made a contribution to the Raymond Priestley Centre in Coniston where Derwen College students spend time as part of their Duke of Edinburgh’s Awards.

Derwen College is a specialist college for young adults with learning difficulties and disabilities. The college offers students the opportunity to learn new skills in real work environments and to learn life skills which will enable them to live as independently as possible. Last year, 60 learners from the college completed their D of E awards at Bronze, Silver or Gold levels. 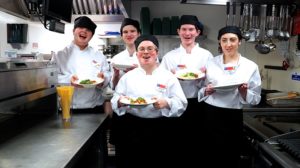 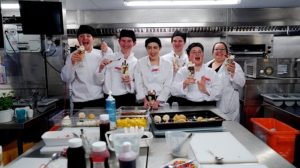 A two-course dinner made from scratch was on the menu when Derwen College students were invited on a professional catering skills workshop.

Five hospitality students from college had the opportunity to train for the day at a Whitbread-owned industry training kitchen.

Whitbread ­­­– owner of restaurant brands including Beefeater, Brewers Fayre, Table Table, Thyme, Cookhouse & Pub and Bar + Block ­– asked students from the Oswestry-based college to attend a bespoke catering course at its North Learning and Skills Academy in Sale, near Manchester. The students and two members of staff jumped at the chance to learn new skills in a professional environment with top class teaching chefs.

Premier Inn Regional Operations Manager Tracey Bishop invited the students on the experience, having established a close professional relationship between Derwen and the UK’s biggest hotel company Premier Inn, which is also Whitbread-owned. The partnership, which sees students undertaking work experience and paid employment at Premier Inn hotels across the UK, has also seen the creation of a Premier Inn training hotel on the college grounds; here students gain valuable first-hand experience of the hospitality industry.

Budding cooks Faye Humphries, Max Marek, William Chapple, James Ashworth and Adam Gill were given the opportunity to work with industry teachers including Craig Robinson, Lead Academy Manager who ran the day. The students prepared a Spaghetti Bolognese from scratch including peeling and preparing the vegetables and garlic. They worked with pictures to help their understanding and were able to take them home so that they could recreate the same recipe step-by-step for themselves.

Derwen College Work Experience Co-ordinator Abi Baker said that students and staff were thrilled to be invited to the professional training kitchen where Whitbread restaurant teams are trained. Staff from the different Whitbread brands undergo initial training there and attend catering courses whenever a new menu is devised.

Abi Baker said: “We had no idea what to expect but Whitbread surpassed anything we could have hoped for. The students were kitted out in full uniform including safety shoes and were looked after like celebrities – with food and drink throughout the day.

“The students were taught step-by-step to make a Spaghetti Bolognese from scratch, followed by an ice-cream sundae with a huge array of ice-creams, toppings and sprinkles to choose from.

“We invited students who we thought would benefit the most from the day; learners who had done some cooking but were keen to reach that next step of learning. They all developed new skills such as crushing garlic and using graters and peelers. Being treated as VIP guests, they were well-motivated and performed beyond our expectations.

She added: “Students were over-the-moon to be given certificates and allowed to keep their catering kit. And, as the cherry on the cake, unlike in their usual catering sessions, the students didn’t have to do the washing up when they’d finished!”

Four Derwen students visited Aston University yesterday to take part in a study to investigate how eye shape can effect focusing and vision in people with Down's Syndrome. Students Anna, Natalie, Laura and Duncan volunteered for the optometry study. Find out more about the project at www.bit.ly/EyeStudyAston @downs_syndrome_association #TeamAston #teamderwen ... See MoreSee Less