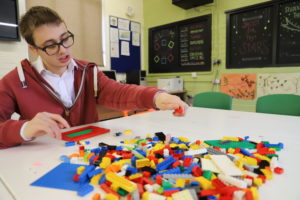 Creating cars, spaceships and fantasy landscapes out of Lego bricks is helping to build communication and team-building skills for some of our students at Derwen College.

Derwen College, in Gobowen, will be running Team Building Skills workshops with students with Autistic Spectrum Disorder (ASD) and communication difficulties, using moulded construction blocks such as Lego. The sessions may look like child’s play but they are a valuable exercise in building students’ skills in communication and teamwork.

Teacher Mathew Barnett is appealing to businesses and individuals to donate Lego kits, Lego bricks, Lego tools and boards so that as many students as possible can benefit from the workshops.

The session will be run by teacher Mathew, who recently trained in team building therapy using Lego. Mathew, who has been working at the college for five years, said that the sessions have been found to be effective for children with autism and related conditions. He firmly believes it could achieve equally effective results with young adults as well.

The idea was first reported by Professor Daniel LeGoff in 2004. Working with autistic youngsters, he would sometimes break the ice by asking children to bring in their latest building project. One day he witnessed two autistic children in his waiting room communicate for the first time – the bond that had brought them together had been Lego.

Mathew says that although the sessions are about learning through a fun activity there are strict rules that ‘players’ all make and agree to adhere to.

“Students choose between a kit or a freestyle project and work together. Working in groups of three, students then assign roles to each other as engineer, supplier and builder. The engineer directs and describes the instructions for the project; the supplier finds the right pieces and passes them on to the builder. The builder then puts the bricks together. In order for the project to go from bricks to final product, the three players must be able to communicate with each other, verbally or non-verbally, and to engage in joint attention, creativity, and problem solving,” he explains.

“This kind of activity develops skills that can be transferred to many other real-life situations and builds essential team work skills’’ he continues.

Student Oscar Pollack will be one of the first students to embark on the training. Mathew believes that Oscar will benefit from the Lego-based team building therapy.

Oscar already has a good understanding of Lego and enjoys working with the blocks.

“In a group, I would like to be the engineer and give out instructions but I think I’d make a good builder as well.

Mathew hopes to start weekly sessions with students in January through until Easter, with a fresh cohort starting for the summer term.

Students achieve certificates at every level, starting from Helper, then progressing to Builder, Creator, Master and Genius. The Genius grade is very rare but Mat thinks he may have a student or two in mind that could achieve this accolade.

He says: “I’m really keen to get started as soon as possible. Students and parents that I’ve spoken to are keen, and the sessions tick so many boxes. They help students in learning numbers and shapes, following instructions, taking turns, communicating and taking responsibility.

“When I went to the training, I didn’t know what to expect but I came away feeling genuinely inspired. I can see so many ways that it could support some of our students.”

With bags of enthusiasm, all that’s holding him back now are the bags of bricks needed to help build confidence, communication skills and countless imaginative projects – the possibilities are endless.

For details of how to donate, telephone Derwen College on 01691 661234 or email enquiries@derwen.ac.uk. For more information regarding the college visit the website.

Derwen College has received a generous festive gift – a donation towards new equipment and day trips for its day students.

Derwen College Area Satellite Manager Peter Leddington said that staff and students were delighted with the kind donation which will help learners to develop work skills towards their chosen career pathway.

He said: “To say we are over the moon is an understatement. The team and our students will be really pleased. We are very proud to be working with a Shropshire-based company that takes education and social responsibilities so seriously. These funds are supporting a college that changes people’s lives.

The donation will be used to purchase equipment to support both the educational side and added enrichments to life skills, these include new sports, arts and horticulture equipment and supporting costs of trips to galleries, sports facilities and broaden our learners’ social confidence.”

Aico Ltd is the market leader in residential fire and carbon monoxide (CO) alarms in the UK. Marketing manager Jo White visited the Walford site to present a cheque to students and staff.

Aico’s marketing manager Jo White said that they were very pleased to be supporting the work and life skills training at Derwen College’s satellite sites.

She said: “Every member of staff at Aico were given the opportunity to put forward a charity of their choice to receive a donation. I nominated Derwen College satellite centres because I worked alongside them for many years while working in education and saw first-hand the difference that the satellite centres make to young people’s lives.”

Derwen College, in Gobowen, is a specialist college for young people with learning difficulties and disabilities. The college offers students the opportunity to learn new skills in real work environments and to learn life skills which will enable them to live as independently as possible. The college has received three consecutive ‘outstanding’ Ofsted gradings and has been shortlisted as Specialist Provider of the Year in the TES FE Awards.

Teresa Richards, who runs Station Café in Gobowen on behalf of Derwen College, received a surprise visit from some very special customers this week.

High Sheriff of Shropshire Rhoderick Swire visited the Station Cafe on the Gobowen railway station platform to present café supervisor and Derwen College learning support assistant Teresa with an award. The High Sheriff Award was presented in recognition of Teresa’s tireless work and continued commitment to the popular Station Café.

Rhoddy Swire said: “When the Derwen College leadership team put Teresa Richards’ name forward for this accolade, I was very happy to make such an award. What an outstanding lady Teresa is!”

Teresa has worked at Derwen College’s Station Café for three years and prior to that as a teacher in the catering department of the college at the main site in Gobowen for 13 years.

Teresa said that she was moved by the unexpected accolade.

“It was such a fabulous surprise. I can’t wait to put my certificate up on the wall in the café,” she said.

“It was so lovely to have everyone – staff, students, customers and community partners – all involved. This award is recognition for everything we do here and the support we receive from the community, as well as providing valuable work experience for our students. It is important for students to engage with customers in the community, and it’s a great asset for Gobowen too. We all work together and are all constantly learning from each other. It’s a lovely place to work.”

Derwen College Principal Meryl Green said that the college was thrilled to be able to nominate such a worthy candidate.

Meryl Green said: “What a difference one person can make! Teresa runs the Station Café which is providing invaluable work experience opportunities Monday to Friday for Derwen’s Hospitality and Customer Services students. Teresa forms great relationships with the students and this provides an excellent base for learning.

“Under Teresa’s guidance the students are learning work-ready and independence skills through making and serving drinks, snacks and lunches, dealing with payments and developing people skills when serving customers. These skills are essential in order to prepare students for future employment after college. They are supported, encouraged and trained by Teresa whilst she is at the same time running this busy outlet.”

The Station Café was provided to Derwen College from Severn Dee Travel who run the ticket office at Gobowen train station. They saw this as a great opportunity to involve students from the college some six years ago. Teresa has formed an outstanding relationship with Severn Dee Travel demonstrating an understanding of their needs as a business, a local organisation in the community and work experience provider for the college. This has led to some amazing partnership work including nominations and awards from Association of Community Rail Partnerships (ACorp).

Derwen College, in Gobowen, is a specialist college for young adults with learning difficulties and disabilities. The college offers students the opportunity to learn new skills in real work environments and to learn life skills which will enable them to live as independently as possible. The college has received three consecutive ‘outstanding’ Ofsted gradings. For more information go to www.derwen.ac.uk.

This year's #Derwen #prizegiving wasn't the big event of previous years, but there was still much cheering and support for our Students of the Year. Read this and all our news at https://www.derwen.ac.uk/latest-news/
Well done everyone. Keep up the good work at home!

Well done to each and every student who gave their all to achieve outstanding progress and successes over the past year. We are proud of each and every one of you.This year's prize-giving wasn't the big event of previous years, but there was still much cheering and support for our Student of the Year in each pathway. www.derwen.ac.uk/latest-news/student-success-at-end-of-term/We look forward to hearing all about our leavers' adventures after College at the October graduation, so please stay in touch. And look forward to returners continuing their progress in the autumn. Keep up those independence skills at home! ... See MoreSee Less