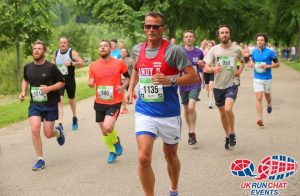 Derwen College is urging runners to complete a 13-mile half marathon to help raise money towards therapy and fitness facilities to benefit students.

The college has teamed up with the organisers of the Shrewsbury Half Marathon to offer free places to two runners who want to run for and raise funds for the college on Sunday, 17th June.

This year, the college – which works with young adults with learning difficulties – is aiming to raise £60,000 towards an exciting new project to re-develop its sport and fitness facilities. The plans include a much-needed upgrade of the current swimming pool and sports hall, and a brand new hydrotherapy pool, which will provide a valuable therapy resource for those with limited movement and agility.

Representatives from Derwen College will be volunteering on the day, cheering on runners, and handing out water, and will have an information tent at the main start and finish point. They are now looking for two runners to take on the 13-mile course and to raise sponsorship. Runners who have already signed up for Shrewsbury Half are also invited to run for Derwen College.

Anna Evans, Fundraiser at Derwen College said: “This is an ideal opportunity for anyone wanting to take part in the Shrewsbury Half Marathon, and raise funds for a great cause. Every penny raised this year will go towards our £60K appeal, which will help us provide important facilities for therapy treatment for our students.”

Race Director Joe Williams commented: “We are looking forward to welcoming lots of runners supporting Derwen College at this year’s race, and we wish the college all the best with their fundraising to re-develop its sport and fitness facilities. The Shrewsbury Half Marathon is well known for its community spirit and huge local support, and it’s not too later to enter. A big thank you also goes to the volunteers from Derwen College.”

If you would like a place at Shrewsbury Half Marathon to raise funds for Derwen College, or would like to know more about DC Charity fundraising, then please contact Anna Evans on 01691 661234 or email anna.evans@derwen.ac.uk

More details of the Shrewsbury Half Marathon can be found at: http://www.shrewsburyhalf.co.uk/ 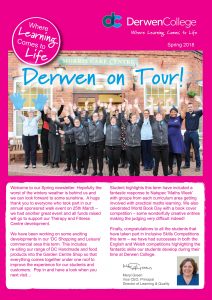 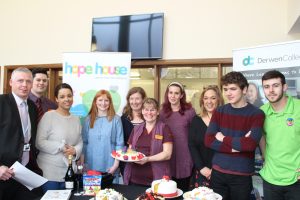 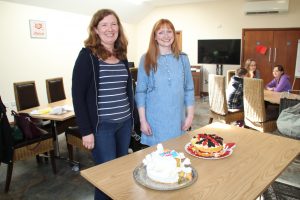 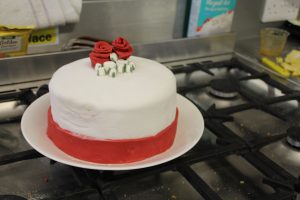 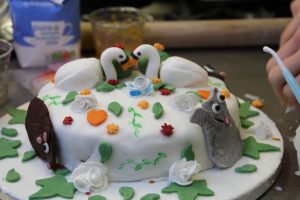 Bakers from three local charities created cakes fit for a royal wedding when they battled it out over the mixing bowls in a Bake-Off style competition held at Derwen College.

Charities Hope House and Empathy for Special Children joined hosts Derwen College for the competition which was supported by Oswestry Sainsbury’s.

Two bakers from each charity competed in the blind baking technical challenge to whip up an Elderflower and Lemon Drizzle cake with a Royal Wedding theme, on Wednesday, 4th April.

The event was overseen by Sainsbury’s Tammy Williams and the tricky process of judging the tantalising creations was carried out by Oswestry councillor and Derwen College governor Paul Milner and Sainsbury’s Richard Kirby and Hayleigh Ellis.

The winner was Hope House Lottery Manager Gill Beckwith who created a stylish three-tier cake decorated with red roses. A special runner-up prize was awarded to Ethan Goddard-Cockaday of Empathy for Special Children for his detailed but fun design complete with a pair of swans.

Derwen College Projects and Partnerships Co-ordinator Laura Griffiths said that the college was delighted to be able to host the event for the second year running.

She said: “Following the success of last year’s Bake Off with Hope House, we felt privileged to be asked to host another competition including local charity Empathy for Special Children. It was a wonderful morning with some fabulous cakes created under high pressure conditions. Thank you to all the bakers who took part, and congratulations to Hope House’s Gill on her win. We look forward to hosting again next year.”

Four Derwen students visited Aston University yesterday to take part in a study to investigate how eye shape can effect focusing and vision in people with Down's Syndrome. Students Anna, Natalie, Laura and Duncan volunteered for the optometry study. Find out more about the project at www.bit.ly/EyeStudyAston @downs_syndrome_association #TeamAston #teamderwen ... See MoreSee Less