Natspec have been the driving force behind the fight for developing the model for an inclusive approach to competition for learners with learning difficulties and disabilities. It is our vision that these learners will compete at international level in vocational skills competitions, alongside their mainstream peers, at their appropriate level.

Working in close partnership Natspec, Find a Future, AELP and the Association of Colleges are hoping to take the first UK competitors to the Abilympics in Bordeaux in March 2016.

Abilympics is currently the only opportunity for competing internationally available to learners with disabilities. First held in Japan in 1981, it is very much eastern influenced, but has been embraced by Skills Finland who train the Finnish national team for WorldSkills.

It will be the first time that Abilympics have been held in Europe since its conception.

The WorldSkills 2015 finals proved to be the ideal opportunity for the dynamic group that was Natspec, Association of Colleges, Find a Future, Finland and France to come together in discussions to move the vision forward.

It is anticipated that the selection process for the chosen categories will take place at the Skills Show being held at the NEC in Birmingham 19-21 November 2015. 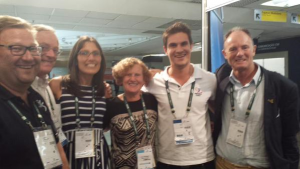 On Tuesday the Shropshire Council ‘Curry Chef of the Year’ competition final took place at the Bradbury Food Centre, here at Derwen College.

The winner of the competition was Shukria Raza from Massala restaurant in Craven Arms. Mrs Raza prepared Lamb Krai and Sag Aloo which wowed the judges.

Congratulations to Mrs Raza, who is the first female contestant to make it through to the final – and to win this prestigious award. 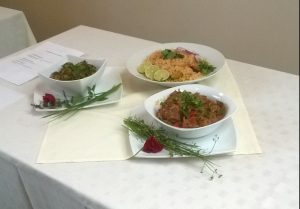 In June Sarah and the Student Council won the NUS Disabled Students’ Campaign’s Student Union of the Year (FE).

In July Sarah won the NUS Simpson King Achievement Award for the work she does with Derwen College’s Student Council as Learner Voice Programme Coordinator.

Of Sarah’s NUS award Christine Lewis, Unison’s representative on the judging panel, said “Sarah stands out because of her commitment to students with learning difficulties and disabilities which is an inspiration to all students and the college community as a whole. Her positive impact on the SU is clear as is her level of personal commitment to the students.”

Sarah has worked at Derwen College for fourteen years and has shaped the Student Council into what it is today – with twenty two students, all with learning difficulties and disabilities, representing all areas of the college.

Sarah has supported learners to attend events and meetings in the local community which has inspired others to come and visit the college, thereby raising awareness of the issues that young people with learning difficulties and disabilities encounter. Sarah’s enthusiasm for being heard in the local community has also ensured learners have a voice about what goes on locally and has enabled them to realise that they as a (student) council are able to make real changes.

And could there be a further award on the way?  Sarah and members of the Student Council worked with National Rail and Arriva Trains Wales earlier in the year to create a film that raises awareness of the needs of people with learning difficulties and disabilities whilst travelling.  The film ‘A Helping Hand’ has now been shortlisted for a national award in National ACORP (Association for Community Rail Partnerships) ‘Passengers matter’ category of awards.  The awards ceremony will take place in Torquay in October.

Join us for the Friends of the Derwen Charity Golf Day. 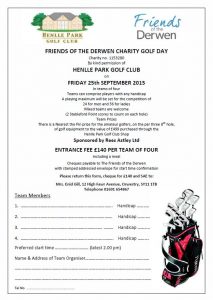 You may have seen the article in the Shropshire Star last week about the tough challenges that we as a college, and as a sector, face in these budget-cutting times. We have heard that some people are worried that Derwen College is closing and we can confirm categorically that this is not true. Yes, we are seeing significant funding cuts and this has impacted on the college in recent weeks with a number of redundancies being made. However, we look forward to welcoming around 50 new students in September and will ensure that the quality of teaching, learning and care for these young people, and our existing students, is maintained.

Whilst we are operating in challenging times, we have enjoyed great positive news stories recently: the Student Council has taken part in a national film project with Arriva Trains Wales, and Derwen College was the first specialist provider to put forward a motion at the National Union of Students Conference (which was passed unanimously); our Student Voice Co-ordinator has won awards from the NUS and Learner Voice Practitioners Network for her work with our students; our Head of Arts, Media & Business Studies has received an MBE; we have been voted the Sainsbury’s (Oswestry) Charity of the Year; and we have had coverage in the Guardian and, of course, on BBC Three.

All this positive publicity helps to raise awareness, not only of Derwen College and the work we do, but it also raises awareness of the challenges that young people with learning difficulties face on a daily basis – and what challenges they have to overcome just to get an education that is suitable for their needs. As a result the Natspec campaign A Right not a Fight comes into the fore, and as more people understand what the campaign is about, our students have a louder voice.

Please keep supporting Derwen College, Natspec and all the other specialist colleges around the country who are facing these same challenges. We have had such positive feedback over the past week, we know we have fantastic supporters locally and nationally and we would like to say thank you.

While the Garden Centre shop is closed to the public, #Retail students have been working on our online shop, eBay shop and on marketing resources for #SpringOpenDay in our #KartenPrintShop. @rbs_derwen. Find out about #SpringOpenDay on 6th March at https://bit.ly/SpringOpenDayPR

The Horticulture team are just as busy with gardening jobs in the winter. Student Oliver and teacher Will have been busy clearing our award-winning Walled Garden ready for the welcome return of visitors when they are able to come. www.derwen.ac.uk/latest-news/a-blooming-triumph-in-challenging-times/Find out more about our Horticulture pathway at www.derwen.ac.uk/learning/horticulture/ ... See MoreSee Less